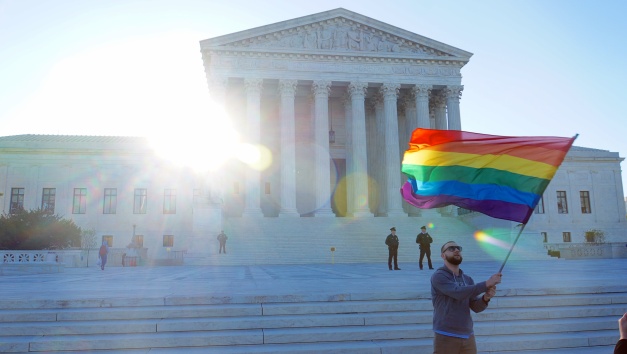 In the early morning hours of Sunday, June 12, gunman Omar Mateen entered a gay club in Orlando and perpetrated the largest mass murder in American history. It was a tragic day for America and for the LGBT community.

And yet, in the days afterwards, the mass outpouring of support from across America was somehow hopeful and encouraging. And maybe not entirely unexpected.

Support for the Lesbian, Gay, Bisexual, Transgender (LGBT) community is sky-rocketing. From 1999 to 2015, support for same-sex marriage spiked 25 points, reaching an all-time high in 2015 with 60% of Americans in support. And in 2004, Massachusetts became the first state to legalize same-sex marriage and in 2015 the Supreme Court legalized same-sex marriage across the country.

Twenty years ago, very few people would have ever thought the gay community would be this open, public and accepted. But today, celebrities and athletes alike are using their fame to raise awareness for the gay community as well as becoming role models for adolescents who struggle with these hardships.

But in the LGBT alphabet, not all letters are created equally. There is one community for which understanding and public acceptance has been slow to emerge: The Transgender Community – individuals whose gender identity (a personal conception of oneself as male or female) is not aligned with their biological sex (male or female identification at birth).

Hard to say how many individuals we’re talking about.  The US Census Bureau does not ask for gender identity and therefore the official population of transgender individuals in the United States is unknown. But according to data from the Social Security Administration, since 1936, 135,367 people have changed their name to one of the opposite gender and 30,006 also changed their sex accordingly. The vast majority of those –  89,667 and 21,833 respectively, as measured by the 2010 Census —  have done so in recent years. These are numbers that can only continue to grow as more light is shed on this community and more members feel free and safe to self-identify.

Ironically, much of the public unease with the transgender community has revolved around, of all places, the bathroom.

Here is the straightforward but difficult question everybody is trying to unravel: Which bathroom should transgender individuals use if they are biologically male but identify themselves as female and vice versa? Should they use the restroom that corresponds with their sex or their gender?

Unfortunately, as this issue unfolds, there have been cases of violence in public bathrooms involving transgender individuals and as a result many transgenders are feeling ostracized and in fear for their safety. One additional complication with loosening of bathroom rules is the risk of female safety. In early March, Christopher Hambrook claimed to be a transgender woman named Jessica to gain access to a women’s shelter. He was sentenced to jail for sexually assaulting several women. Women have been exploited, sexually assaulted and raped due to these “fake transgender women”.

In efforts to take control of this bathroom situation, North Carolina quickly approved its House Bill 2, also known as the “Bathroom Bill,” on March 23. Governor Pat McCrory refers to the bill as “common sense” while the White House called North Carolina’s law “meanspirited”. Part I of the bill states: Individuals must use the bathroom that corresponds with their “biological sex” stated on a person’s birth certificate.

But the exceptions the “Bathroom Bill” supposedly protects against are few and far between.  The Obama Administration, a longstanding supporter of the transgender community, responded to a recent case at a high school in Reuters, Virginia that demonstrated gender discrimination against a transgender male student, sending a letter to all public school districts in the country telling them to allow transgender students to use the bathrooms that match their gender identity.

To me, the issue is straightforward: the transgender community needs the same rights and support the gay community receives. Support comes from acceptance and acceptance begins with education and awareness. It will take time, but we will get there.

Often times there is a gap between what people think they know and the reality.  We thought women were not responsible enough to vote, or that African Americans couldn’t fight for their country, or that an African American or woman could never serve their country as president.  I have full confidence that the transgender perception gap will close as well. The nation will soon realize that female or male, black or white, gay or straight, everybody falls under the same umbrella. We are all human and deserving of respect.

Cause Comments™ is a forum from Tiller, LLC to discuss corporate social engagement, cause marketing, strategic philanthropy and related topics. Tiller provides strategic communications and cause marketing services. We believe companies can advance public interest and their bottom line at the same time.